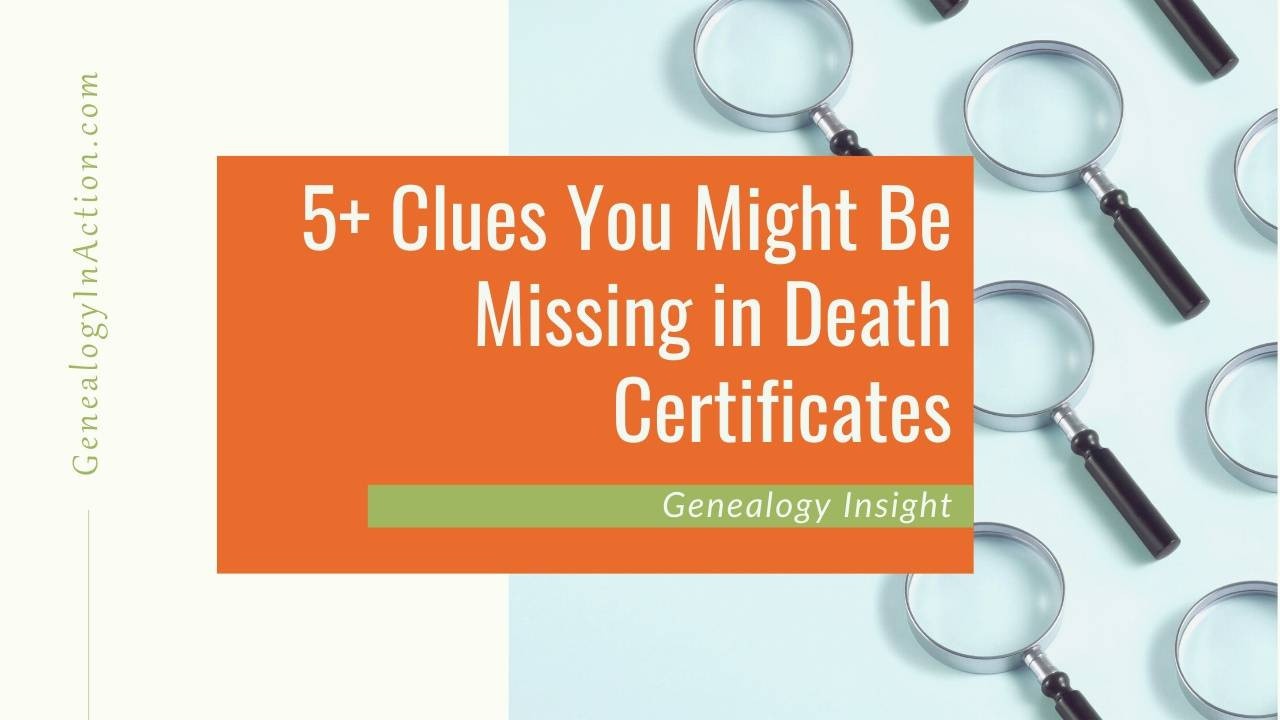 5+ Clues You Might Be Missing in US Death Certificates

Are you reading everything in every record you uncover? I’ll be honest. My answer to this question years ago would have been, “well, I think so,” and I would later discover just how wrong that answer was.

You see, back in the day, I used to be a grab-and-go genealogist. I would grab the few pieces of information I wanted from a record and move on to the next record, and rinse and repeat. It wasn’t until I realized I was missing important clues in records that I really started to pay attention to every bit of information in every record I came across.

You’d be surprised what you can learn if you slow down and really look at everything a record is telling you, even if you don’t think it’s important at the time (because it will likely be important at some point). To illustrate my point, I’m going to show you some examples by looking at some things you may be missing in death certificates.

I decided to use death certificates from the same county and state to illustrate just how much these records can evolve over time and how the information collected can differ even in the same place. We know this is true in the back of our minds, but we don’t really think about it, especially if we’re in a grab-and-go mentality. And of course records vary from place to place too, so we want to me sure we are reading every record in it’s entirety to really milk it for everything it’s got to tell us. We need to break the grab-and-go habit, so let’s start right now by looking at five clues you may be missing in death certificates.

In this 1891 example, the question is: “How long resident in this state?” Because this person was an immigrant and he’d been living in Illinois for eight years, and assuming the information is correct, he likely immigrated to the US by 1883, giving us a clue when looking for immigration and naturalization records. 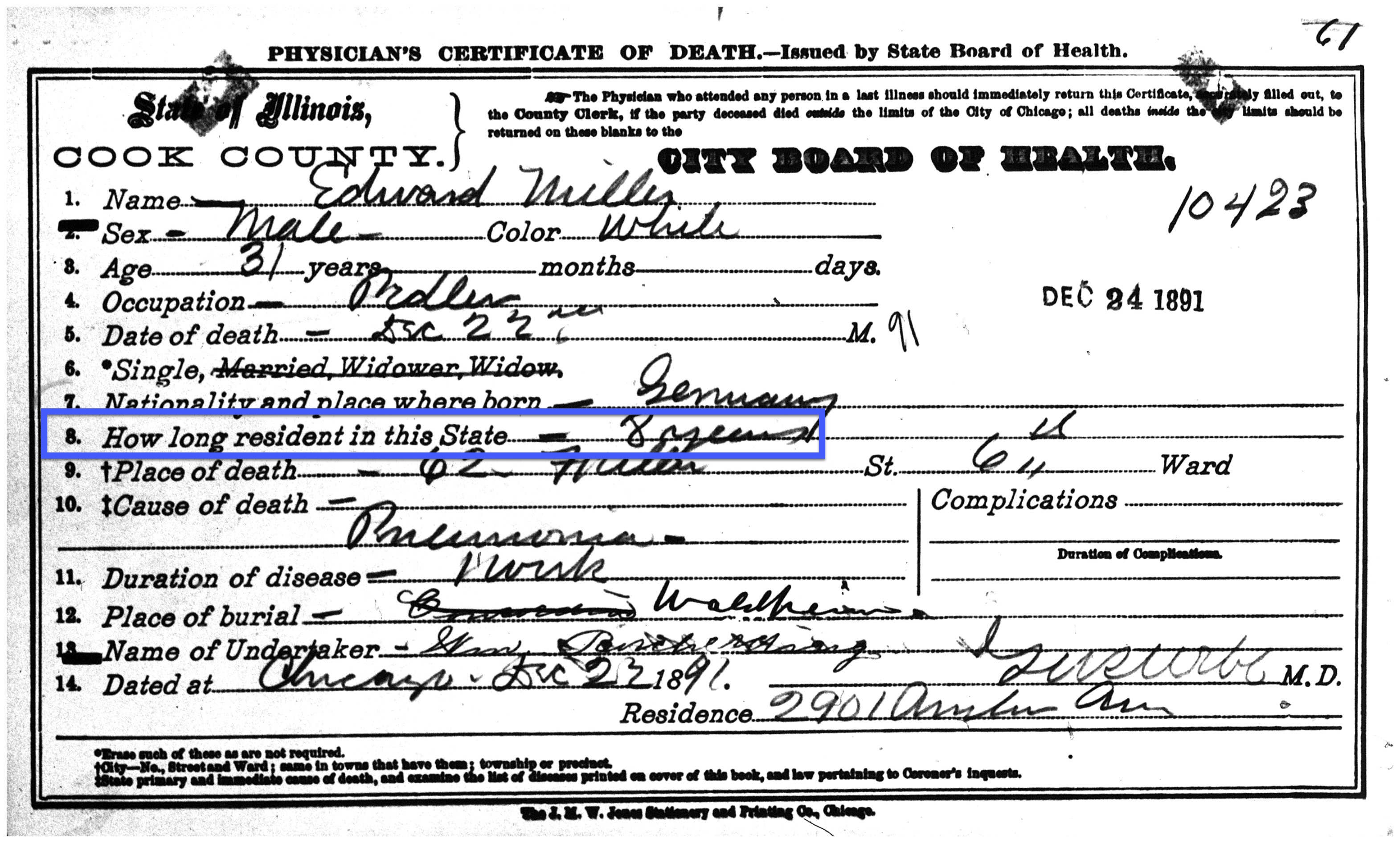 In this 1932 example, it asks for length of residency in the city or town where the death occurred, and if foreign born, how long in the US. For both 31 years is listed, so if the information is correct, she immigrated about 1901 and had lived in Chicago ever since. Again, this information can help with finding immigration records, but it can also help in finding other records, knowing that she had resided in Chicago for the previous 31 years. 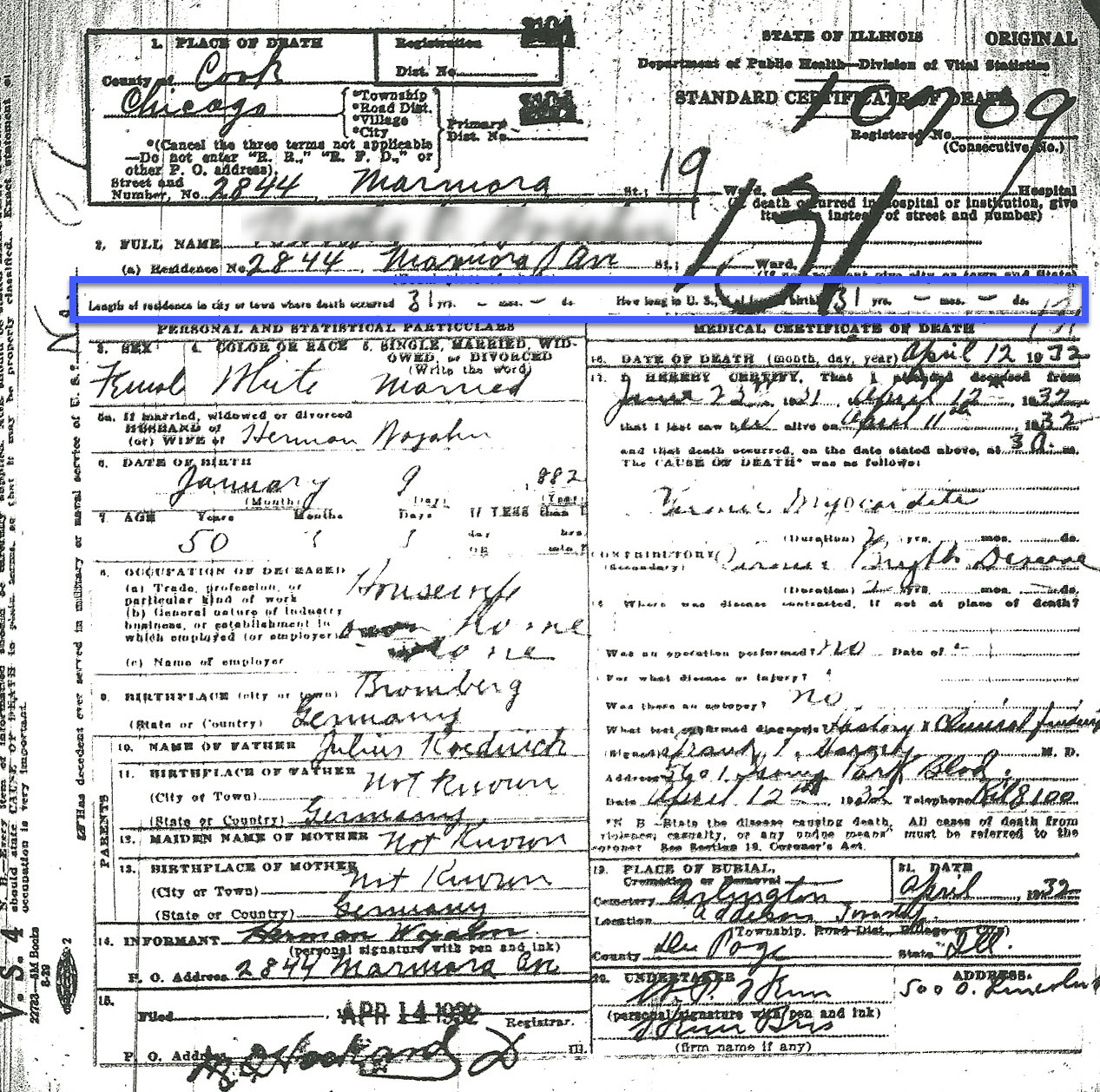 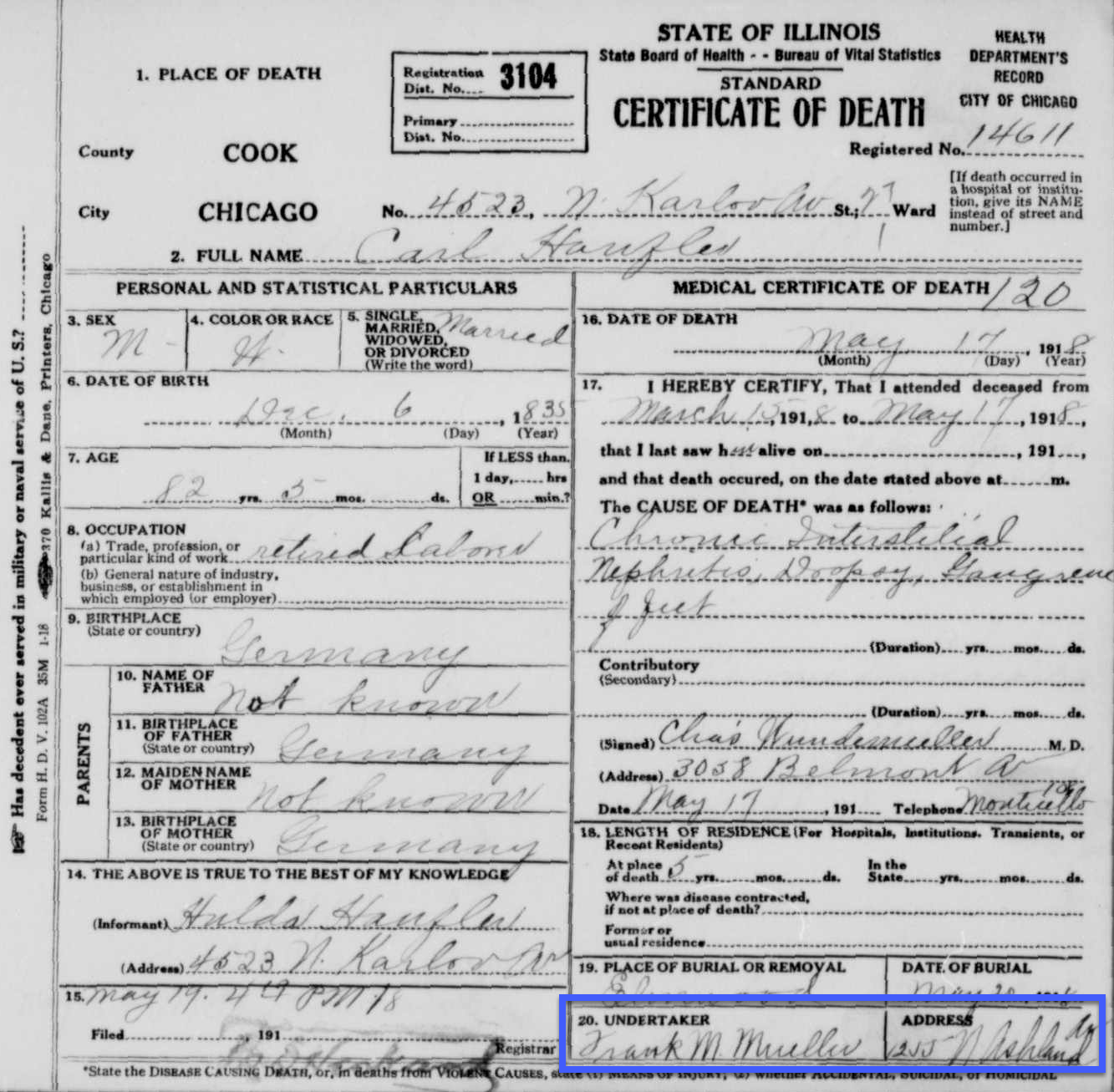 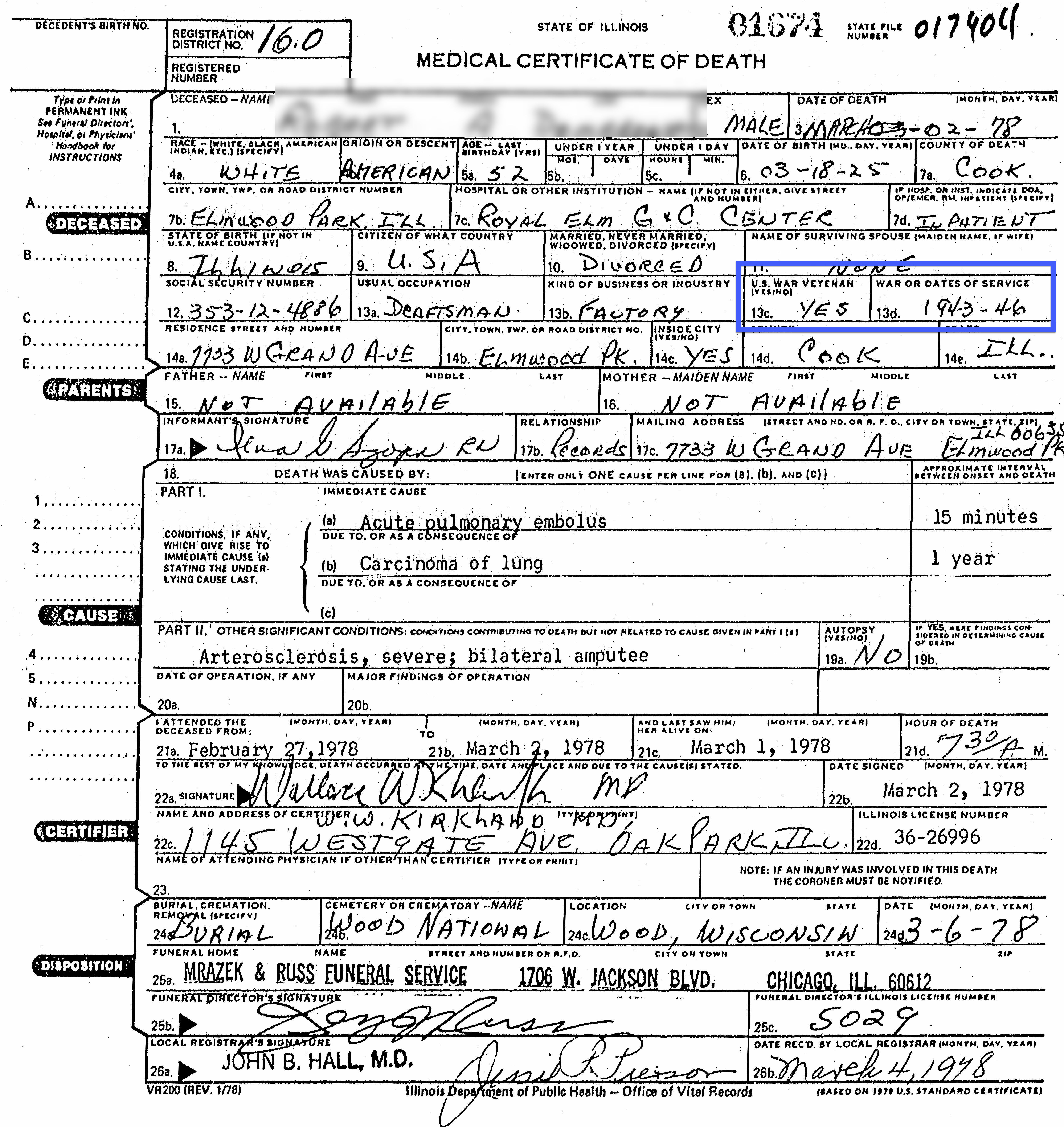 I found two death certificates for my great-grandfather’s death in 1946. There are several clues that an inquest was conducted. First the temporary certificate issued states that the inquest is pending. On the permanent certificate, there is a note of the inquest being held and the findings. 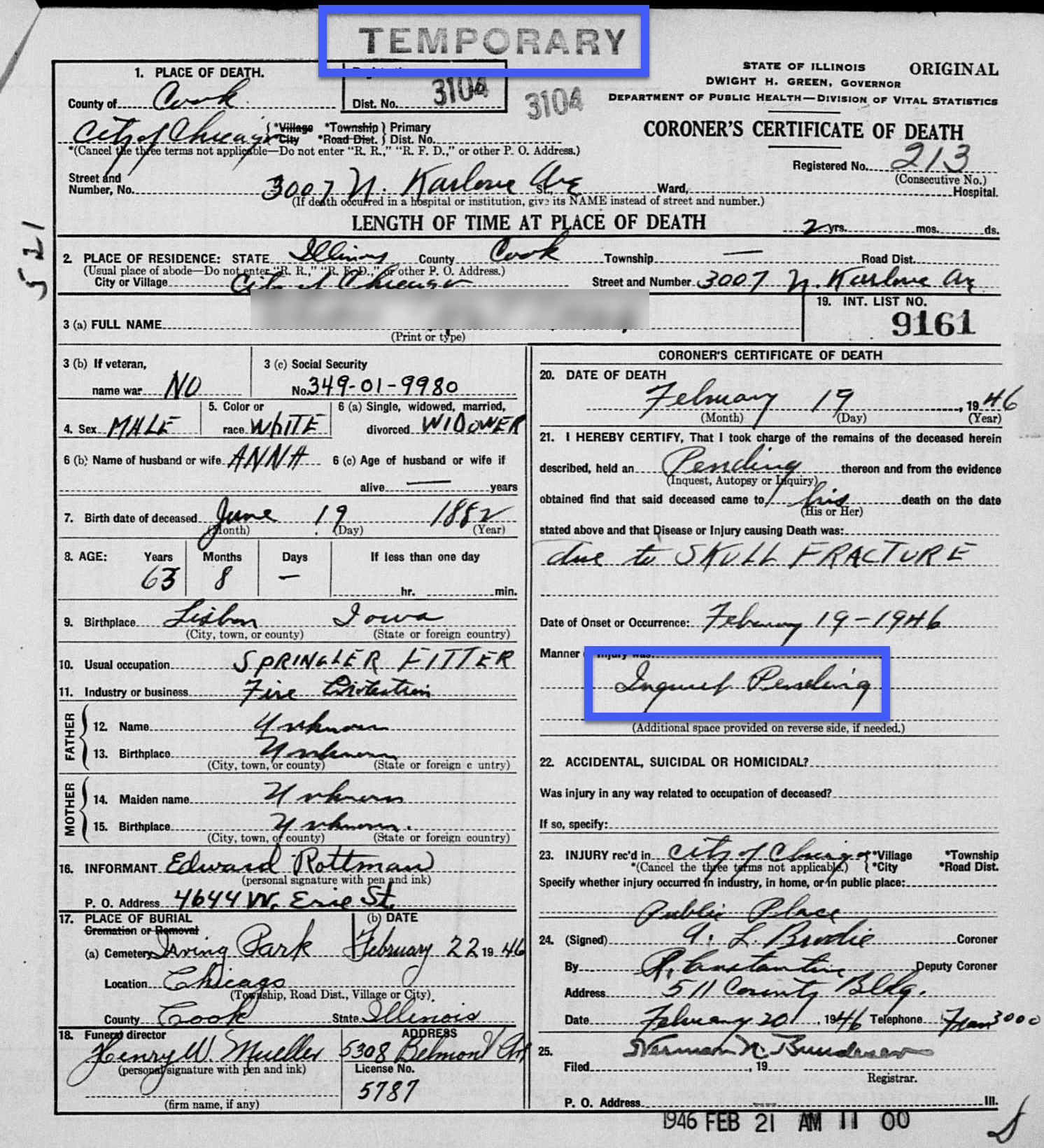 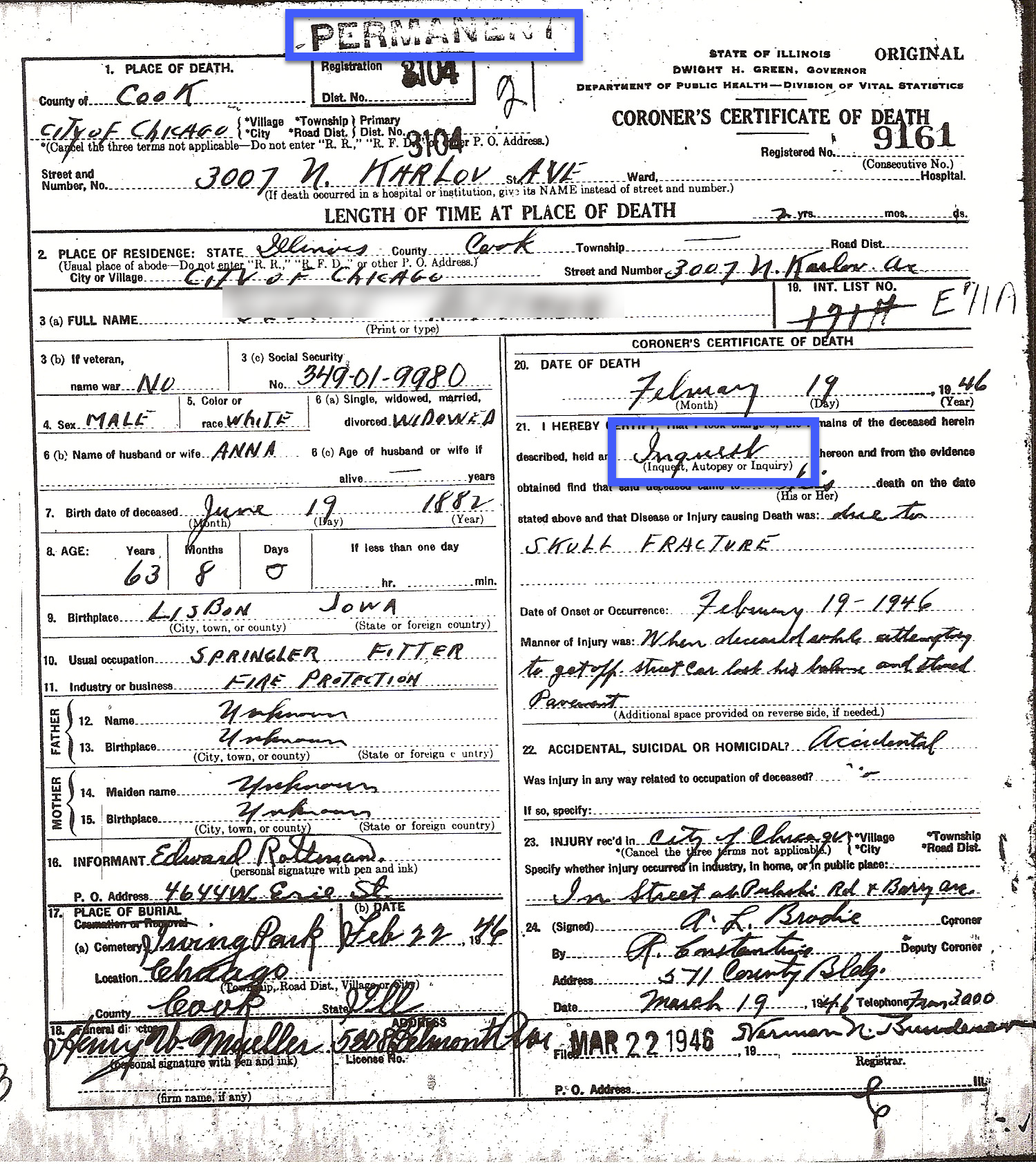 If there was an inquest, records were created and they can contain more information than what’s listed on the death certificate so if they’re extant, you’ll want to seek them out. Here’s a tip: Earlier death certificates may not provide any indication of an inquest, so you need to become familiar with the laws at the time to determine if there would have been a need for an inquest and if so, then you can look for those records. This can also be a useful strategy when death records don’t exist.

You’re likely looking for the place of death, but are you following up on it? For example, the place of death could be the decedent’s usual residence, or it could be the residence of a family member or a hospital, nursing home, or sanitarium. These are all clues and details you’ll want to make note of. That strange address could be the address of a married daughter who you lost track of and now you can use the information and pick up her trail again. If the person died in a hospital or some other facility, are you able to get any records from the facility? They’re not always easy to get, but they can be a goldmine of information. In this 1914 death certificate, this person died at the county hospital. It also tells us how long he was there, which was 4 days. Perhaps there’s a way to get a copy of those hospital records, which could tell us more about the events surrounding his death, besides the fact that he died of diphtheria. 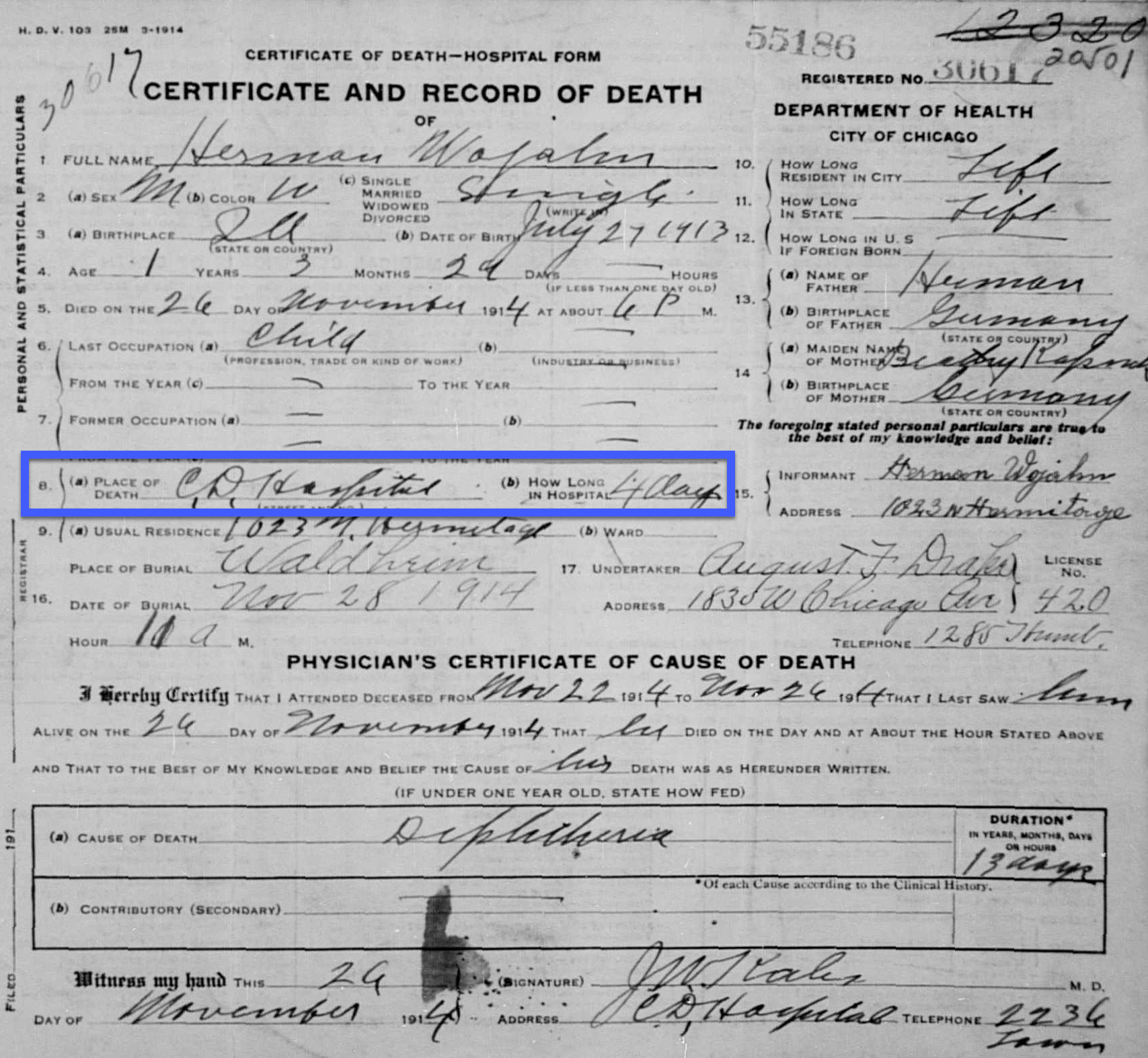 Now you’re probably already making note of who the informant is so you can check for reliability of things such as the decedent’s place of birth and their parents’ names. But…are you noting the informant’s appearance in the death record as an event in their own life? That simple event is the fact that they were living at the time of the decedent’s death, and that could be crucial if you have gaps of time for that informant. Sometimes you’ll even get an address or at least a city where they’re residing at the time, so you’ll want to make note of that and use those clues as needed.

There are actually more clues hidden in death records that I didn’t cover here. But let me reiterate the importance of reading everything in a record so you don’t miss those important clues! Break the grab-and-go habit today! How can you do it? See the Take Action prompt below.

Here’s what I want you to do. Pull out two or three death certificates and READ the whole darn thing. If it helps, transcribe it—that’s what I do, so I know I don’t miss anything. I’m guessing that if you take some time to do this activity, you’ll start to see things you’ve previously overlooked. I’m hoping that experiencing these ah-ha moments will inspire you to drop the grab-and-go mentality and really dive deeper into records moving forward.

I hope you enjoyed this article and that you’re ready to ditch the grab-and-go mentality so you can get the most out of the records you find. If you found this article helpful, be sure to add the Genealogy In Action blog to your favorite RSS reader.