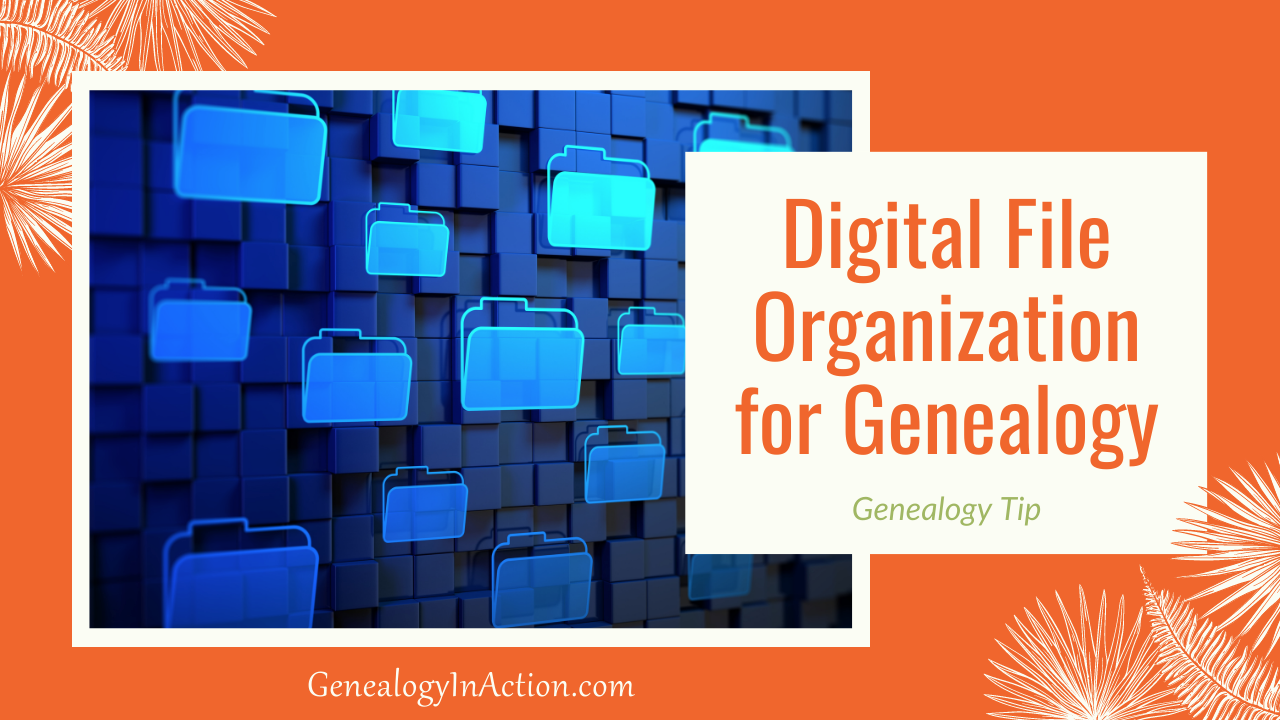 This post contains an affiliate link. You can review my full Disclaimer here.

Organizing all of our genealogy "stuff" can be quite the challenge. In fact, it's the #1 area that genealogists struggle with (according to my informal poll). I get it! I consider myself a highly organized person, but I struggled for years trying to figure out a system for organizing both paper and digital genealogy files.

Since we're approaching a new year, I've seen a lot of genealogists setting goals to get organized. That said, I though I'd share with you how I structure my digital files, how I name them, and how to add metadata for future reference. I'll also share a tip for how to tackle a renaming project so you won't feel overwhelmed by the task.

I have a main folder named Family Tree. This folder holds everything related to my personal genealogy research, including my Legacy Family Tree files; digital images of records, photos, and resources (such as digitized county histories and maps); correspondence; reports; forms and templates; articles and stories I’ve written or am working on, etc.

For the purpose of this post, I will focus on my Images & Documents folder, which contains three subfolders: one for records related to my husband’s family, one for my family, and a research folder.

Note: I named my Images & Document folder with 00 – at the beginning of the folder name so that it appears at the top of my list. I organize many of my folders this way, using numbers to force the order I want (heck, I even have my folders in Outlook organized using numbers 🤪). 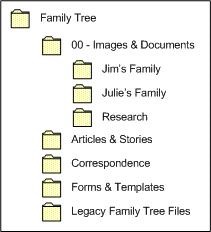 The two family folders are organized by surname and will be the focus of this post. You’ll notice in the image below that I again use numbers in front of folder titles, again to bring them to the top. When I don’t know the maiden name of a female, it goes in the Unknown Maiden Name folder. The Unknowns folder holds a few unidentified photos and some documents from my family papers that I don’t know who they belong to. 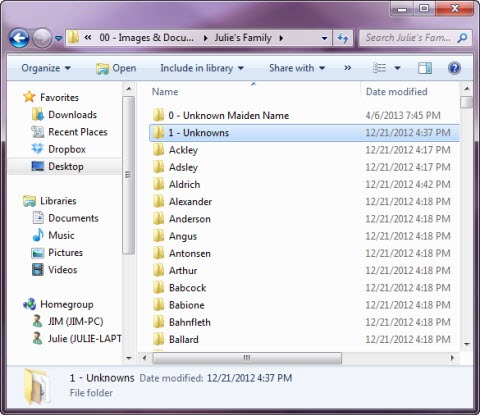 Within these surname folders, there is a Photos folder and all the digital records associated with that surname. My naming convention is how I keep them organized without have to add yet another layer of folders. More on that in a moment. 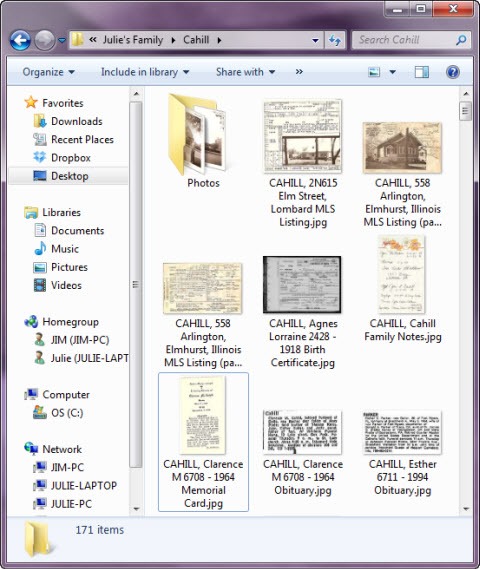 So now that you’ve seen how my files and folders are structured, let’s turn to the naming convention I use.

This is the part that has evolved over time and I finally found something that works for me. In 2013, I set a goal and dedicated some time to go through and rename all of my files and photos. It was well worth it. After years of using this convention, I wouldn't change a thing.

The RIN is the number assigned to each individual in my database (and will carry over to other programs if I ever switch). This helps me deal with people of the same name, as well as knowing exactly which person a record matches up to in my database. Following this specific order of elements essentially groups all the records together for the same person and provides a timeline of sorts since I include the year of event.

So for example, the file name for the 1847 Luxembourg census record for my fourth great-grandfather, Heinrich Schwartz, would look like this:

Another example, using a middle name, would be my grandfather’s death certificate, which would look like this:

I would also like to mention that I file everything by the main person of the record. So for example, a female’s death certificate would be filed under her maiden name, not her married name. Additionally, I only save one copy of a record. So for example, a census is filed under the head (when it’s the female, again, it goes under her maiden name), while a marriage record would be filed under the groom. I’ve found that keeping the records batched this way is easier for me than dealing with a couple or family groups (especially when multiple marriages are involved).

The last thing I want to share with you is how I use metadata to further define my digital images. Metadata is sometimes tricky and different depending on the file type. All of my images are saved as high-resolution JPG files, so the process I will demonstrate will work for those files types, as well as a few others including TIF files.

In order for me to know the source of the image, I simply use the source citation and place it in the Comments box in the properties of the image file. To do this on a PC, right-click on the file and choose Properties. (For Mac users, see this Wiki How article and scroll to the second part which is for Mac.) 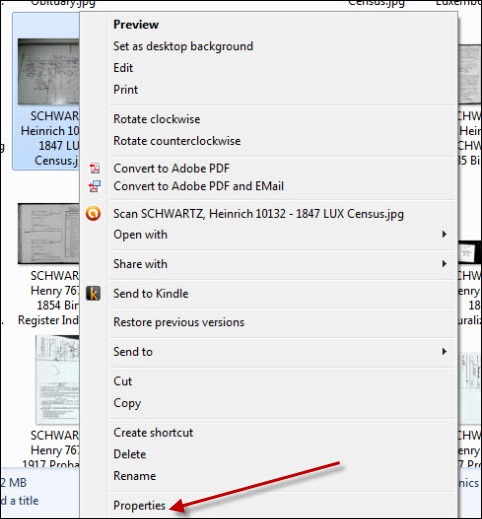 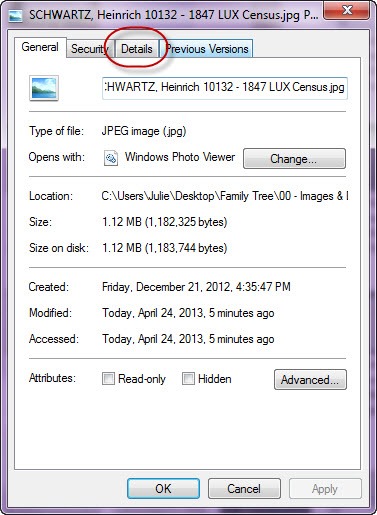 Then type (or paste) the citation in the Comments field. 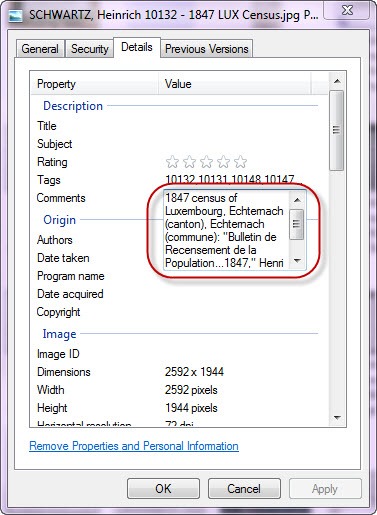 The other thing I do is add tags for all the people associated with a record. This way, I can run a file search and find all of the images that pertain to that person, even if the image isn’t filed under that particular person. Remember I said I only save one copy of a census? This is how I compensate (same goes for photographs with multiple people). For the tags, I use the RIN number for each person so that it is consistent and I know who corresponds to who in my database.

You’ll notice in the image above, there is a Tag field right above the Comments field. So you would follow the same process to get to the Details tab in the Properties panel to add your tags.

Note: This has served me well for many years, and I will continue to follow this convention. But, one of my goals for 2022 is to start building an archive in FOREVER, where I can add even more metadata and details.

If you're like me, you likely have thousands of digital files and the thought of renaming all of those files can seem incredibly overwhelming. I totally get that because I felt the same way. I had actually set out to do my renaming in 2012, but I hardly made a dent. When I set the goal for 2013, I declared that I would spend 30 minutes each day working on the renaming project until it was done. I would actually start out my day with this task so that I could ensure it got done every day. After a week or so, it became habit, so when I finished, I kinda felt empty for a few days. I think it took me about four months to complete the project, but the point is, it got DONE! I will be using the same strategy when I start working on my FOREVER archive in 2022.

I hope this post gave you some insight into how I manage my digital images. There are plenty of ways to organize your digital images; I’m simply sharing the way that works for me. I can’t say that it will work for you, as we all operate and think differently. But maybe it will...or maybe it will spark an idea of your own that will work better for you.

If 2022 is your year to get your digital files organized (no matter the method you choose), I encourage you to declare that goal and set aside time each day, week, or month to work on the project. You could do something like I did and set aside 30 minutes each day. For my FOREVER archive, I will be dedicating one hour every Friday until the project is complete.

To declare your goal publicly, you can head over to my Facebook page where I've asked followers to post their 2022 genealogy-related goals.