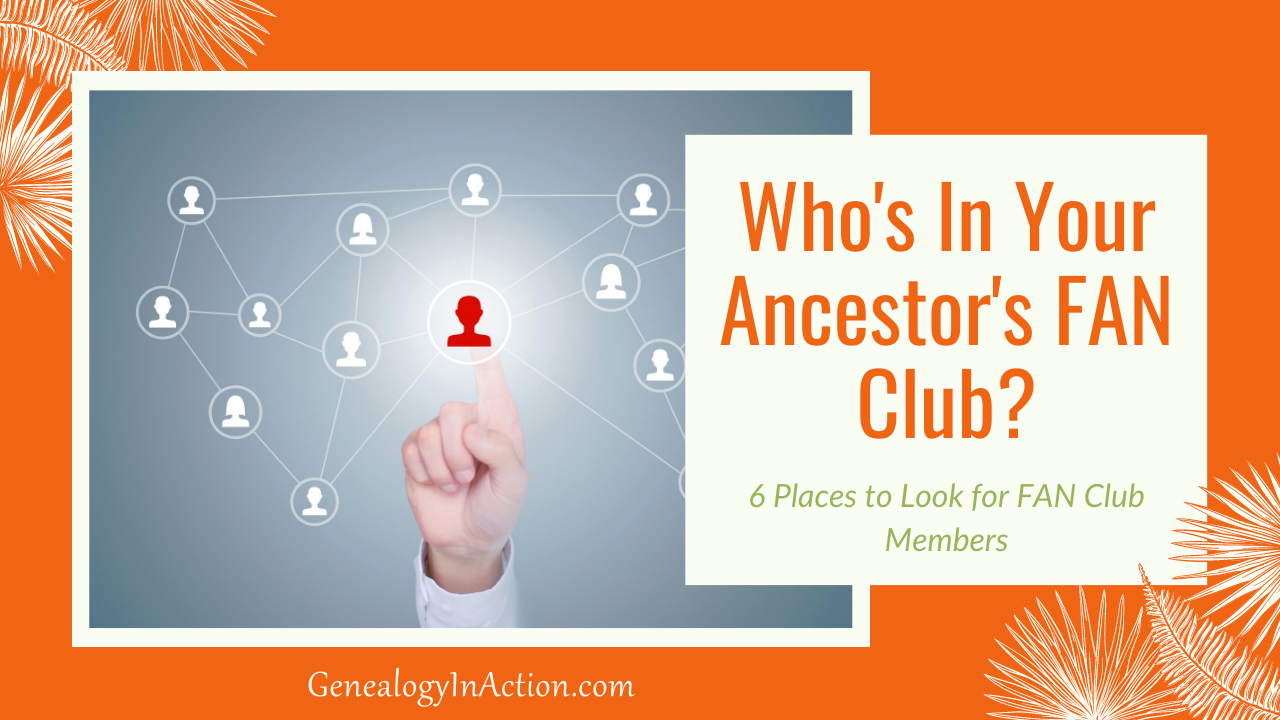 Before we dive in, let's address the question: What is the FAN Club?

FAN Club is a phrase coined by Elizabeth Shown Mills. FAN represents family/friends, associates, and neighbors—the people that were part of your ancestor’s social network. By including these people in your research, you may uncover clues that can help answer questions of identity, relationship, origin, and more.

So, where do you look for these people? Here are six of my favorite records to get you started.

Censuses can provide a wealth of FAN Club members. Study the actual household, looking for others residing there that may be unknown to you. They could be family members, in-laws, or friends. Even a seemingly innocuous boarder could be someone connected to the family, such as an associate from the old country.

You’ll also want to look at the households near your ancestor. These neighbors could be family or provide clues as to the origin of your ancestors as people often migrated in groups. For rural areas, I recommend studying five to seven households listed both above and below the family. For urban areas, especially if there are addresses, you might want to map out the block so you can find not just the houses on either side of the family, but also those across the street, those on intersecting streets, and those on the street behind the family.

Some denominations record a wealth of information in their parish registers. You’ll want to pay attention to the witnesses to marriages and baptisms. Membership lists are also helpful in building an ancestors network. Tip: Look for your family members among the witnesses for other people’s events.

Family members, and even in-laws, were often buried near one another. Look at nearby gravestones for clues. If available, consult burial records, which might tell you who is buried nearby (especially if there aren’t any gravestones) and who purchased and/or currently owns the plot(s).

Look for anyone named in the file, including those who provided affidavits and those who served with the veteran. Affidavits could be provided by family members, in-laws, associates, or other veterans.  Other veterans may also be named throughout the file and could be helpful in learning more about the unit in which the ancestor served (learning more about the unit can lead to additional FAN Club members).

There are many types of land records, and an entire blog post could be dedicated to how to use these for FAN Club research. Here are a few highlights to get you started.

There you have it! Six record types that you can use to start building a FAN Club for your ancestors.

Pick an ancestor that has been difficult to research. Using as many of these sources (and others not mentioned above, such as naturalization records, passenger lists, obituaries, probate records, guardianship records, etc.), start building your ancestor’s FAN Club. It can be a simple as a list in a word processing or spreadsheet program, or as elaborate as a mind map. Next, analyze the FAN Club, looking for people and/or surnames that come up multiple times—these are the people you’ll want to start with and investigate further.

P.S. Studying the FAN Club is a great strategy to use for breaking down brick walls. For more strategies, download my free guide.