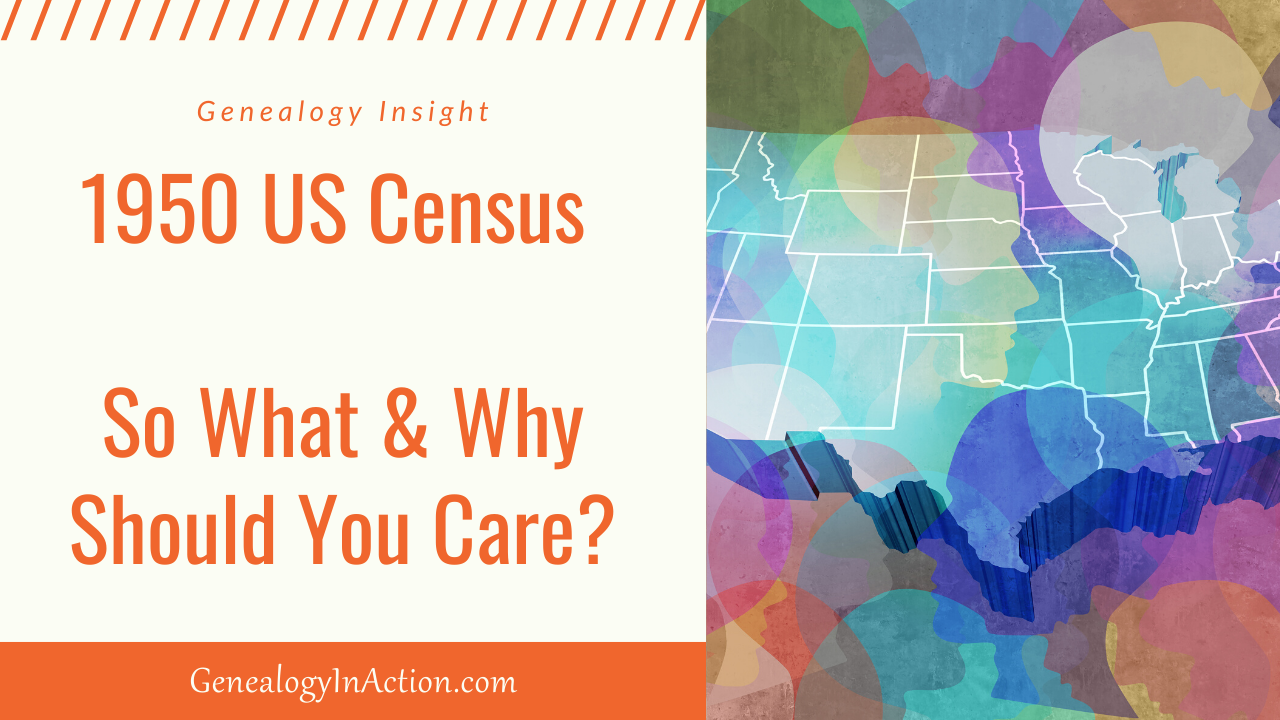 I remember seeing a lot of people comment during the lead up to the 1950 US census release that they didn’t understand the hype and really didn’t care to look for people because they “knew” them. I have continued to see this in the week following the release, and I have to say that I strongly disagree with this notion, and I’ve got three reasons why that I’ll share in this article.

As part of the Genealogical Proof Standard, we are to conduct reasonably exhaustive research, so an attempt should be made to find all relevant sources connected to a person. Plus, you can learn all sorts of things from the 1950 census that can add to a person’s story. And, these additional data points could be the missing clues that you need to solve some of your brick walls.

Personally, I think it’s pretty cool to see these people on a sheet of paper, especially because I knew them. I was thrilled to see both my mom and dad appear in their first census, along with their family units. My dad was actually living with his parents and his maternal grandparents, and his aunt lived next door, something I didn’t previously know. I also learned that my dad was in kindergarten that year at the age of 5. And, bonus, if you’re able to share the census with the named individual, they’ll think it’s pretty neat too!

Ignoring a record is just NOT a smart move because you don’t know what a record contains until you look at. Case in point, I found a new cousin lurking in the household of two maiden sisters who are cousins of mine. I don’t recognize the “new” cousin’s surname, but this could be an important clue as I continue to unravel this family. It may also lead to additional evidence to further strengthen my conclusions about some of the relationships in the family.

So there you have it. My take on why the 1950 US census is an important source for your genealogy research. By seeking it out, you could uncover a goldmine of information you didn’t previously know, and when it comes down to it, you’re learning more about the individuals, even if you knew them! Just because you knew them doesn’t mean you know everything about them. You probably don’t know what they were doing in 1950, if they were working, or what type of job they had, if they were living with other relatives or boarders, or anything else the census can tell you. I learned that my grandmother, her sister, and their mother were all bookkeepers in 1950. I had no idea that any of these ladies ever worked (and began to wonder if that’s why I had wanted to be an accountant at one point). I also noticed that my maternal grandfather said “yes” to living in the county a year ago, but I would have assumed they were still in Chicago while their house was being built in DuPage County in 1949. So now I have a question about where were they living while the house was being built. My mom was probably too young to remember, but my uncle might know (note to self: ask him ASAP!).

Bottom line: I believe that we should be looking at all sources to fill out a person’s life, and that include the 1950 US census.

I always like to wrap up my videos with an action item. If you need some help with the 1950 US census, I have several YouTube videos that can guide you through what the census included, how to locate your family members without an index, how to search the NARA index and find and browse the images there, and how to find and browse the images on other genealogy websites. So that’s your action item—take a look at some of these videos that are designed to make your 1950 US census search experience easier so you can get results.

I hope you enjoyed this article and that you’re excited to start exploring the 1950 US census if you haven’t already. If you found this article helpful, be sure to add the Genealogy In Action blog to your favorite RSS reader.